If you’ve read any of our other documentation, you know that the speech pipeline is the main way you interact with Spokestack’s speech recognition and wake word. This guide is here to explain in a little more detail how the iOS version of Spokestack uses this collection of components to recognize wake words and user speech.

As the name implies, SpeechPipeline is a collection of distinct modular components that work together to process user speech. All components are established at initialization time and can be broken down into two main areas of functionality: processing audio and communicating with your app. It uses the Builder pattern (via the SpeechPipelineBuilder class) to handle its potentially complex configuration. In short, the pipeline receives audio via on-device sources and sends it through a variable number of stages, each of which performs some form of processing and optionally dispatches events back through the pipeline. The stages interact with the pipeline via a shared SpeechContext; each stage may alter this context; for example, a voice activity detector may set isSpeech to true, signalling that the last frame of audio represented speech.

How does it work? 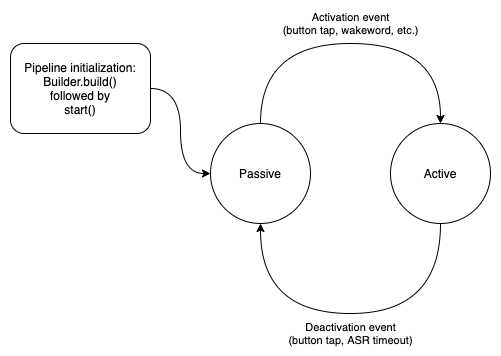 As you can see, once the pipeline has been built (after the return of SpeechPipelineBuilder.build()), calling start() puts it into a passive listening state—or it will if the pipeline has been properly configured. You could have an ASR class as the only stage, in which case an ASR request would start immediately upon calling start(). This is almost certainly not what you want.

While the pipeline is listening passively, it sends audio through its stages a frame at a time (a “frame” defaults to 20 ms of audio, but it’s configurable). That audio is not leaving the device, though; it’s waiting for a stage to recognize a trigger word or phrase and set the pipeline’s SpeechContext to active. The classes that do this in Spokestack have Wakeword or Trigger in their names. See AppleWakewordRecognizerand VADTrigger for examples.

When active, audio frames are not processed on-device but are instead sent to an ASR service to be transcribed (if an ASR component is registered in the pipeline; these components have names that end in SpeechRecognizer). These ASR requests end when a pre-set timeout is reached or when the pipeline’s SpeechContext is manually set to inactive. At that point, the ASR service’s best effort at a transcription is delivered via a speech event to any registered listeners.

Spokestack offers several pre-built “profiles” that bundle stage classes and in some cases configuration properties tuned to support different app configurations. See the API reference for for a complete listing, but here’s a brief summary:

Profiles take care of all configuration that can be managed in a one-size-fits-all fashion. For example, note the paths to the wake word models in the example above. Some components require additional configuration, such as third-party API keys, paths to TensorFlow models, or the DispatchQueue for sending events that are received on the UI thread.

All pipeline activity, including activations, deactivations, ASR timeouts, receipt of ASR transcriptions, and tracing messages/errors are delivered asynchronously to components that implement the SpeechEventListener protocol and are registered in the pipeline via setListener at build time.

Your implementations of all these methods will be very important to how your app handles voice interactions, because the delegate acts as a kind of gatekeeper between speech events and pipeline operation. You’ll recall that earlier we mentioned a UI “listening” indicator would go in didActivate, and that’s true in many cases — often you’ll want to alert the user that you’re expecting a voice command from them (that the ASR component is active and interpreting their speech). If, however, you want to let the user know that the device’s microphone itself is active (which it naturally will be when waiting for a wake word), you’ll want to condition that indicator on the pipeline’s start and stop events. The types of events it receives depends on whether the ASR has been activated from a wake word or by using pipeline.activate().

Using a profile that has Speech in the name will automatically trigger ASR upon wake word activation, also sending you the didActivate event.

Using a profile that does not have Speech in the name will send the didActivate event upon the wake word being triggered.

If you start the pipeline from a user interaction like a button press that calls pipeline.activate(), didActivate will be called. You may also wish to display a “listening” indicator in your UI when you receive didActivate and remove it when didDeactivate is called.

The speech configuration is comprehensive enough to have its own guide, but in summary, this is where most of the fine-tuning for both wake word and ASR happens. See the configuration guide or API reference for more details on each of these, but here are a few examples of the parameters you can change:

OK, so that covers pipeline construction. What about the other methods available?

These methods control the pipeline as a whole. When stopped, the pipeline consumes fewer resources, but no speech recognition, either wake word or ASR, can happen. Call start to begin listening for a wake word, and follow it immediately with a call to activate if you want to jump straight to ASR (this is most likely to be useful in an app that doesn’t use the wake word feature at all). Call stop to deactivate the microphone.

Once created, a single instance of SpeechPipeline can be stopped and restarted at will; just remember that Spokestack cannot use the device’s microphone when it is stopped, and that start and stop are much more expensive than activate/deactivate.