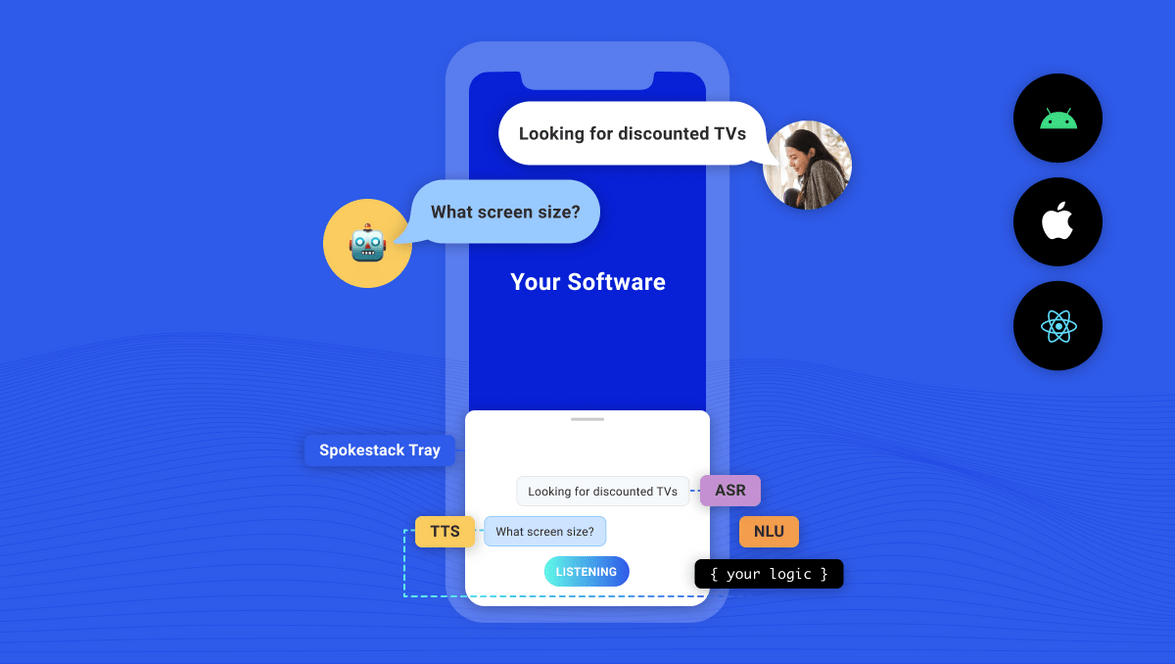 Today we are excited to announce our latest developer feature: Spokestack Tray, a mobile library that lets developers easily add a voice interface to their existing app through a UI component that opens inside the application. Spokestack Tray incorporates our voice services, such as a wake word, speech recognition, natural language processing, and custom text-to-speech voices, into one easy-to-add package along with any existing mobile application. We’ve built a demo, the Bartender mobile app, that uses Spokestack Tray.

Here’s a video of Spokestack Tray working in our demo Bartender app:

Download the Bartender app and try Spokestack Tray on your own phone:

Why is this a big deal?

Getting started with Spokestack Tray

We want to make it as easy as possible for you to get started with Spokestack Tray. Here are the steps to get a prototype up quick:

If you’re new to voice, we’ve put together an introduction to how Spokestack thinks about voice. For more on how to design the voice experience, walk through the Design section of our docs.

At Spokestack, we believe flexibility and customization are keys to building successful conversational interfaces. We will be adding more design resources and tools over the next few weeks. Additionally, we help you further customize your app with custom wake words, TTS, and your own cloud or on-device NLU model.

After you get a demo up and running, let us know if we can build a custom wake word or TTS for your mobile app. We’ll hook up the first three developers who show us a working version of Spokestack Tray in their mobile app with a free wake word, NLU training, and custom TTS. Email us your working demo and we’ll help you add these features to your app so you can publish it live.

Expect an update on design tools, the Android Tray library, and additional tutorials soon. Follow us on Twitter for all updates. Can’t wait to see how people use Tray with their mobile apps.

Have fun talking to your customers!

What If You're the Product?